The Instagram queen faulted her colleagues, Warri Pikin for making a video of her condolence visit to the deceased.

According to her if Warri Pikin was really touched and wasn’t doing it for publicity, she wouldn’t have the mind to tell her P.A to hold the camera and record her activities.

She further stated that the comedian even had the heart to edit, and even add soundtrack to it.

Etinosa Idemudia called her action offensive. She added that though clout is good for business but this one is not nice.

“I feel we can all drop our phones and cameras and really do the condolence visit we came for. Imagine me seeing someone recording himself or herself coming to my father’s house for condolence. I would have destroyed that camera. Let’s all be emotionally sensitive, emotionally involved and emotionally genuine. Not everything is CONTENT. Well. I guess. We all grieve differently.

If you are really touched, If it is not just a publicity sighting for you, you will not have mind to tell your P.A hold the camera. As I’m walking in the recording. Record everybody. As she’s crying record her. Then you sat down, edited, even put soundtrack. No. It’s offensive. Clout is good for business but this one is nit nice”. 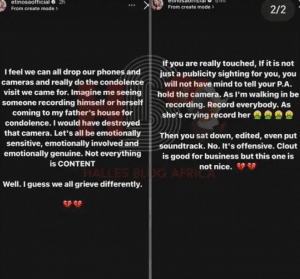