Nollywood actress, Mercy Aigbe has revealed her role model for the whole world to see.

Taking to her Instagram page, Mercy shared a photo of herself and veteran actress, Sola Sobowale in a movie set smiling.

Mercy Aigbe described Sola as her absolute favorite, role model, her mother, and the king.

“Greetings from the entire remote village of Gbudugdudu, away from civilization. Doing this with one of the my absolute fave, My role model, my momma , Oba herself @solasobowale” 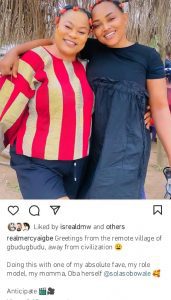 Sola Sobowale who earned her title; ‘The King’s from her award winning movie, ‘King of boys’ were she played the role of Oba meaning in Yoruba; King.