Actress, Susan Pwajok has reacted to the death of her senior colleague, Ada Ameh.

Actress, Ada Ameh who was a co star alongside, Susan in the popular television show; “The Johnson” passed away on Sunday by 11pm.

Susan took to her Instagram stories to share a screenshot of messages she received from the Ada Ameh before her death. 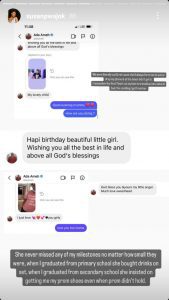 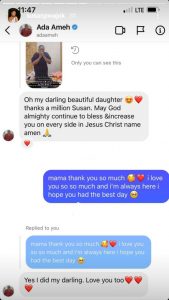 Recall that it was revealed that actress, Ada Ameh died of heart attack and mental issues.

According to controversial Instagram blogger, Gistlover who contacted the family of the deceased had this to say;

JUST IN : SO WE JUST CONFIRMED FROM THE FAMILY ELDER NOW THAT ADA AMEH IS GONE, THIS IS HEARTBREAKING. MAY HER SOUL REST IN PEACE, THE CAUSE OF THE DEATH WAS SAID TO BE FROM MENTAL ISSUES AND HEART ATTACK”.

MAY HER SOUL RIP!!