Bobrisky who is indeed a fashionista in his own sense dressed up in a lovely blue dress while rocking an 18 carat gold necklace, according to him. 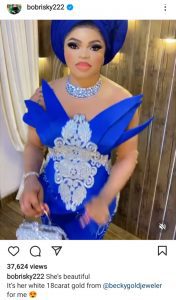 The self acclaimed sugar mummy of Lagos is known for his controversial lifestyle.

The crossdresser who is fond of getting into trouble with other celebrities, the likes of; Tonto Dikeh, James Brown and controversial Instagram blogger, Gistlover.

Recall that Gistlover called Bob out for refusing to pay the caterer he hired for his 400 million naira house warming party.

Bobrisky however responded telling the caterer to ask his boss as shim has settled all her dept and also dragged Gistlover for spreading false news about shim.