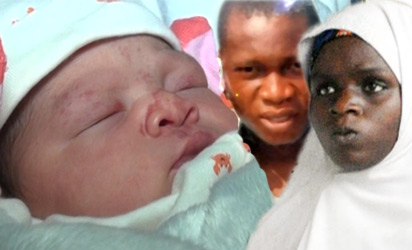 Regardless of the fact that he is still behind bars, Yinusa Dahiru, the 18-year-old boy alleged to have abducted, raped and impregnated 14-year-old Ese Oruru, has named the baby girl delivered Fatima.
Ese was delivered of a baby girl on Thursday morning at the Government House Clinic after she went into labour at her Police Officers Mess temporary residence.

The young man was granted bail some months ago, but unable to meet the bail conditions and is remanded at the Okaka Medium Security Prisons was said to have broken into smiles when he was told that Ese had given birth to a baby girl.
According to sources, when the story appeared on social media, one of the members of the legal team called to confirm and upon confirmation, the story was broken to the Dahiru family and Yinusa was also informed.
“ Yinusa has been told about the birth of a baby girl by Ese Oruru. He was called from Kano and told that he has a daughter after the Internet pictures were confirmed to be true. He was very elated over the news and he immediately gave her the name Fatima after the daughter of Prophet Mohammed and because of the circumstances surrounding the birth of the girl, which he believes is divine. The name Fatima is the personification of high virtues and purity. As I talk to you, I can tell you that he is eagerly waiting to see the daughter”.