Rev. Abimbola Esther is a philanthropist and a white garment clergywoman. She is the founder of C & S (Iya Adura) London’s Love of Christ Generation Church. Through her ministry and humanitarian foundation, she has touched and changed many lives.

ESTHER AJAYI BIOGRAPHY
Esther was born on April 2, 1963, in Mushin, Lagos, Nigeria, where she excelled as a successful businesswoman before dedicating her life to full-time ministry.
When you meet Rev. Mother (Dr.) Captain Esther Abimbola Ajayi for the first time, you are struck by her bubbly energy. She has a lot of swag, but not in an arrogant, look-at-me sort of way. This woman cleric turned billionaire philanthropist exudes self-assurance derived from a clear sense of purpose and identity.

Apart from her constant preaching of the gospel and winning souls for Christ, her humanitarian services have rekindled many dimmed hopes. Esther Abimbola Foundation is her brainchild. 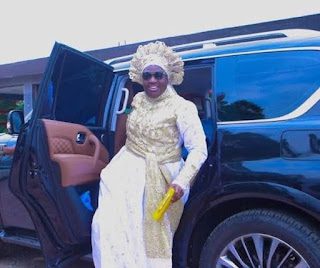 Esther Ajayi has been spiritually sensitive seen when she was very young, as she revealed she prayed for her mother, who was critically ill at a particular time. Her health improved on the following day. She also recounted the moment she prayed for a pregnant woman who was long overdue, and she gave birth. Esther started seeing signs of being special from a tender age. She narrated how at a young age when our mother was critically ill, she was asked to pray for her, and her health improved the following day.

Also, she once prayed for a pregnant woman who was long overdue for delivery and she delivered a baby.

Rev. Mother Esther Abimbola Ajayi received her early education at St. Michael’s Catholic School in Mushin, Lagos. She was baptised at the school. As a result of her brilliance, she completed primary school and was admitted to Ikeja Senior Grammar School, Bolade-Oshodi, Lagos in 1974 for secondary education. She holds a BA in Biblical Theology from Faith Bible College Sango-Otta, as well as other academic honours, as an avid theologian and Bible scholar.

ESTHER AJAYI CAREER
Esther Ajayi grew up to become a thriving entrepreneur. She has been fending for her parents since age 20. At 25 she built her first house which was a storey building, that she keep in the care of her parents.
Esther Ajayi divine calling to start a ministry was an interesting one. In an exclusive interview with Kemi Ashifon, she said ” I’ve always had dreams of having a bell and a big Bible in my hands. I dreamt of sending people out of church that has gone fetish and cleansing dirty altars.” “My journey to ministry kick-started in 1997, when as a businesswoman, the then, National Electric Power Authority, NEPA owed me N4.2m. I was in Abuja and was bent on retrieving my money because I was owing a bank and was servicing heavily. One day, I boarded a taxi and as my usual practice, I would always pray for every hour. The taxi driver, who I called Baba Ogbomoso (he’s late now) saw me praying in the taxi at 3 pm and I asked if he would join me. We prayed together after which he asked if all was well. I told him about NEPA owing me. He quickly asked me if I would meet a woman of God to pray for me. Desperate for help, I agreed to see the prophetess. That was how I met Rev Esther Oguntoyinbo. Immediately after I got there, she knelt down and asked me to pray for her. I was confused and wondered what she was saying because I had come to her to pray for me. She persisted and I just said a short prayer. Then, she said God wants me to carry His cross and that God would prove this with the payment from NEPA, which she said, would be paid within 7 days. That way, I would know that God wants me to carry His cross. Before I left her place, again, she asked me to pray for her.”On my way back, I wasn’t pleased with what the prophetess said because I needed my money to be paid and not carry any cross. But on the fifth day, I went to methodist gospel.”

“That was how I started preaching and I would preach on my streets, everywhere and even when we came to London. I would ring the bell and preach the gospel on the streets of London, saying, ‘repent for the kingdom of heaven is at hand.’ Initially, people looked at me but they got used to it and said hello.”

Prophetess Esther Ajayi got married to Rev. Dr. Ademuyiwa Ajayi in 1984. He is a lecturer in theology at Faith Bible College, Ota, Ogun State. According to the reports, they have been together for over 40 years. Their union is blessed with two boys, two girls as well as an adopted daughter. At some points, there were rumours she owned a private jet like many of the popular Nigerian clerics; Esther Ajayi has, however, debunked the reports as she disclosed she doesn’t have any even though she can afford it. The popular prophet revealed that her great-grandfather was the one that brought the Methodist church to Agboyi town in Lagos state.

ESTHER AJAYI NETWORTH
Net Worth Over  $40 million
She says she makes her money from church donations tithes and offerings and others who want to support the church.