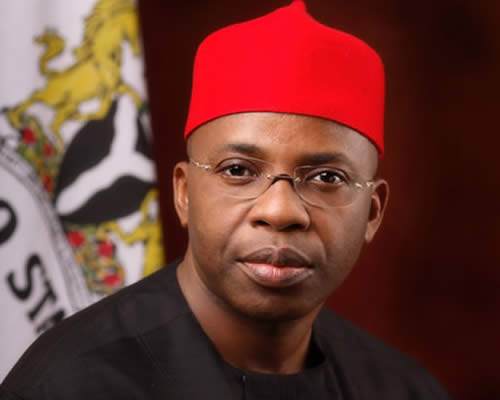 A Federal High Court in Abuja has ordered a former Governor of Imo State, Mr. Ikedi Ohakim, to open his defence to charges of money laundering instituted against him by the Economic and Financial Crimes Commission.

Justice Adeniyi Ademola made this order in a ruling on Thursday after dismissing the no-case submission filed by the former governor, who had claimed that the evidence, led by the prosecution to prove its case, had established no prima facie case against him.

The prosecution accused Ohakim of purchasing a property at 60 Kwame Nkrumah Street, Plot 1098, Cadastral Zone A04, Asokoro District, Abuja, with cash payment of $2.29m, which was said to be dollar equivalent of N270m in November, 2008.

The offence is said to be contrary to Section 1 of the Money Laundering (Prohibition) Act 2004 and punishable under Section 15(1)(d) of the same law.

The former governor was also accused of attempting to conceal the ownership of the property by entering into an agreement as a tenant in the property.

The offence is said to be contrary to and punishable under Section 14(1b) of the Money Laundering (Prohibition) Act.

Ohakim was also accused of failing to declare the property as part of his assets when asked by the EFCC to do so in January, 2014, thereby allegedly committing an offence under Section 27(b) and (c) of the EFCC Act and punishable under the same section.

After the prosecution closed its case with six witnesses and tendering of documentary evidence as exhibits on May 5, 2016, the defendant, through his counsel, Awa Kalu (SAN), indicated his intention to file a no-case submission.

He contended that ýthe prosecution’s evidence had failed to link him (Ohakim) to the commission of the alleged crimes.

He filed the no-case submission in line with provisions of Section 303 of the Administration of Criminal Justice Act 2015.

Had the application succeeded, it would have ended the trial.

But Justice Ademola, in his ruling on the no-case submission on Thursday, held that contrary to Ohakim’s claim, the evidence, led by the prosecution, had established a prima facie case warranting the former governor to open his defence.

The court adopted the sole issue formulated by the prosecuting lawyer, Mr. Festus Keyamo, as to “whether the prosecution has made out a prima facie case so as to warrant the defendant to enter his defence.”

Justice Ademola answered the question in the affirmative and resolved it against the defendant.

The judge said after reviewing the processes filed by parties to the case with respect to the no-case submission, their lawyers’ oral submissions and judicial authorities on principles, which guide such application, it was clear that Ohakim had case to answer and must have his day in court.

He added, “I need to add nothing more but to state that after applying these settled principles of law coupled with several well known cases, some of which counsel cited before the court as well as reviewing the oral and documentary evidence adduced by the prosecution, a prima facie case has been made out against the defendant, necessitating him that the court will call upon him to defend himself and have his day in court in respect of these criminal charges.

“From the foregoing, the defendant no-case submission application fails and it is dismissed by this court.”

The judge fixed October 10 and 13 for Ohakim to open his defence.