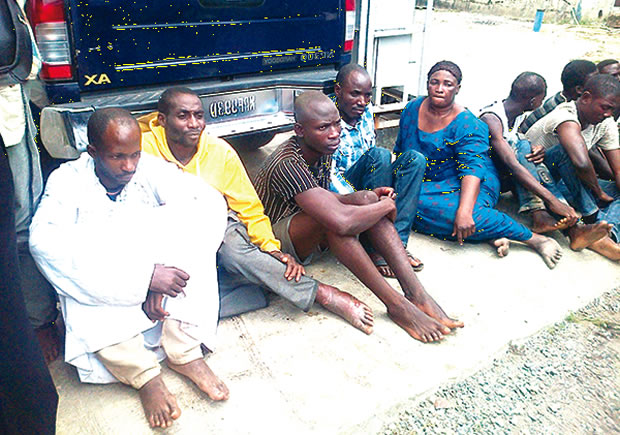 The Zone 2 Police Command, Lagos State, has arrested a gang of armed robbers which allegedly hijacked trucks at gunpoint in different parts of Ondo, Oyo, Ogun and Lagos states.

It was learnt that among the seven suspects was a 54-year-old grandmother, Bola Ajayi, who was apprehended in the Ilupeju area of Lagos State for allegedly receiving some of the stolen goods.

Our correspondent gathered that the gang members were arrested by operatives attached to the zonal command on Monday, August 1.

The police said the gang members were nabbed at about 10am while allegedly on a robbery operation at a hotel in Ore, Ondo State.

Two locally-made guns and one dummy gun were recovered from them.

Speaking with PUNCH Metro while being paraded at the zonal headquarters, Ajayi, who hails from Abeokuta, Ogun State, denied knowing the gang members.

She said, “I do not know any of these gang members. It is true that I bought about 100 cartons of drinks from Lanre’s father (Gbadamosi). That was in April 2015. I did not know the goods were stolen. The man was my friend’s husband. It was the man who said he had some goods to sell and I paid him. I cannot recall how much I paid for the cartons. I have never met his son or any of these people. I have children and grandchildren; I cannot rob.”

Gbadamosi said he had participated in two robbery operations, adding that he had repented.

He said, “I am not the ring leader. But when the police arrested me, I became sober. I was the one who led police operatives to arrest the others. I had gone to rob on just two occasions. I cannot say how much I made. I was into plank business before. A friend introduced me to hijacking trucks and I made N300,000 on my first operation.”

The Assistant Inspector-General of Police, Zone 2, Abdulmajid Ali, who paraded the gang, said investigation was ongoing.

He said, “The suspects were arrested in Ore, Ondo State; Fiditi, Oyo State; and Ogijo, Ogun State. The syndicate confessed to hijacking and robbing about four trailers between 2015 and now. They were also involved in serial kidnappings in those states. Investigation is in progress and the suspects will soon appear in court.”