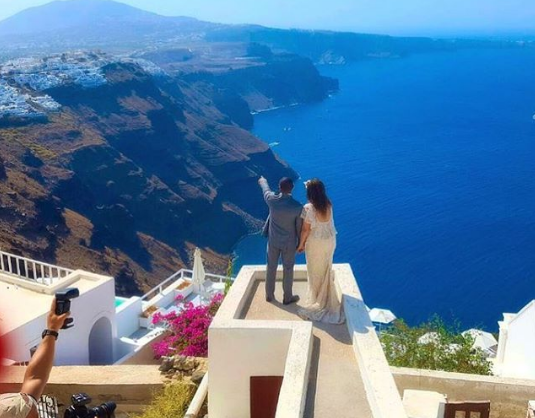 Monalisa and her husband, Tonye Coker, had their wedding in Sontarini, Greece on September 1st.
Monalisa China

The Nollywood actress whose marriage to the Question Mark label boss, Dejo Richards, crashed about seven years ago, over claims of domestic violence, walked down the aisle again on Thursday, September 1, 2016 in Grecian fairy stale wedding.
The actress and mother of one had married her beau, Victor Coker traditionally on February 20, 2016 at father’s compound in Port Harcourt, Rivers State, with a few of her celebrity friends in attendance.
Speaking on her first marriage, she had said “One thing I regret most is the fact that I am divorced. Where I come from, I’m the first daughter. I’m from a royal family, it has never been on record in my family that the first daughter would walk out of her matrimonial home. But it was a matter of life and death, otherwise, I would have stayed back and make my marriage work.”