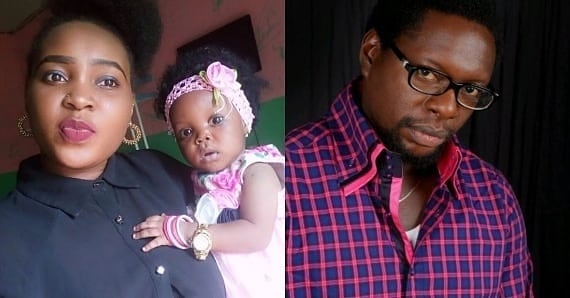 Although comedian Afamefuna Klint Igwemba, aka Klint da drunk, has refused to speak on his baby mama scandal, the woman he allegedly had a baby with, Sandra Novo-Jacob, insists that he is the father of her daughter.

Named Annora Uchechi Klint Igwemba, the mother had earlier stated that Klint did not show up for the christening of the little girl.

Speaking with Sunday Scoop on Friday, Novo-Jacob said she didn’t regret having the baby, who turned one-year-old on Thursday.

The 26-year-old mother said, “I have never regretted having the baby; it was a promise I made to myself. Even when no one is there to make me happy, she makes me happy. I also don’t regret the day I met her father (Klint).

“Though I didn’t throw a party for her, I am happy that my daughter is one-year-old and I thank God for keeping her alive despite all the challenges that have come my way. The father didn’t wish her a happy birthday.

He was aware that Thursday was his child’s birthday; I sent him a message on the day but he didn’t say a word. I don’t feel bad that he didn’t show her love on her birthday as he has never been there for her.

I have been the one taking care of the child alone.” Novo-Jacob stated that she didn’t speak out on social media with the intention of troubling his marriage as claimed by some people.

She said, “I called him out on social media because I wanted him to accept the child and take care of her.

But he has refused to do so and I will continue to take care of her. I am not tired of doing this as she is my child as well.

I didn’t speak out to spoil his home; I am not even interested in marrying him. If I had wanted to destroy his marriage, I would have called his wife; I have her number. But I didn’t want to do that.”

According to her, the only time Klint has called her since the social media rant was two months ago, warning her not to disturb him again.

Sandra added, “I have not stopped calling him because he is the father of my child.  But I don’t have anything against him. I am a free person. No matter what he does to me, I will always forgive him.