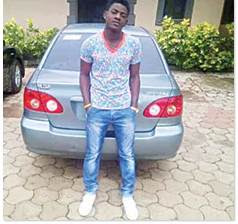 Akungba-Akoko, Olumuyiwa Ewarawon, a final year student of
Psychology of Adekunle Ajasin University, Ondo State, has been allegedly
murdered by suspected para-military organization operating in the University.
The deceased according to reports, was the only son of his
aged mother.
The family in a petition to the Ondo State Commissioner of
Police, Mike Ogbodu, filed by the counsel to the deceased’s father, Chief
Goodluck Ibitoye Ewarawon, alleged that Olumuyiwa was attacked in his room at
Shanghai Hostel in Akungba, a private hostel outside the school campus, by the
armed gang of seven boys under the guise of being student cadet officers.
According to the reports from the family by their counsel,
Olufemi Meduoye, “The armed assailants broke into Olumuyiwa’s room while he was
asleep and attacked him, thereafter, brutalized, bruised and inflicted on him
fatal injuries from which he fell into coma. The gang dumped Olumuyiwa’s body
at the General Hospital, Iwarooka Akoko before good Samaritans brought the
incident to the attention of the family three days later.”
It was further gathered that they took the comatose body of
Olumuyiwa from the hospital to Trauma Centre Ondo which instantly referred the
case to Obafemi Awolowo University Teaching Hospital, Ile-Ife.
The family said the boy never came out of coma and died
later in the hospital.
While the University authorities responded by condemning all
para-military organizations in the institution, it was reported late yesterday
that two of the suspects had been arrested.
Police Image Maker, Femi Joseph, who confirmed the incident
said that the suspect is on the run and that detectives are on his trail. He,
however, assured that the suspect would soon be apprehended and made to face
the law court.
However, the family of the deceased is insisting that the
culprits who allegedly killed their son should be made to face the wrath of the
law.
They urged the Commissioner of Police to use his good office
to ensure a full investigation of the murder of Olumuyiwa by the suspected
Cadet Officers.
Also, they asked the authorities of the institution to look
at the activities of some armed gang who operated under the guise of para-military
to attack members of the public.