Controversial Ghanaian writer and activist, Waterz Yidana, has received nomination from the U.S. Embassy in Ghana to officially represent Ghana at the International Writing Program at the University of Iowa.

The IWP program is known as one of the oldest and most recognized literary residences in the world, running since 1967 in Iowa City.

Announcing the great height, the US Embassy in Ghana on their official Facebook page congratulated the playwrights with some few words.

Congratulations to Ghanaian playwright and poet Waterz Yidana who has been selected to participate in the International Writing Program. Yidana’s participation in the Fall Residency is made possible by Exchange Programs – U.S. Department of State. He writes for Ghanaweb and The Mirror. His play MADMAN AND THE DRUNKARDS has been adopted by the University of Ghana. He has won several national and international awards and nominations.

The Fall Residency is a component of the International Writing Program (IWP) and is the oldest and largest multicultural writing residency in the world. The Fall Residency brings outstanding authors from every continent to the University of Iowa. 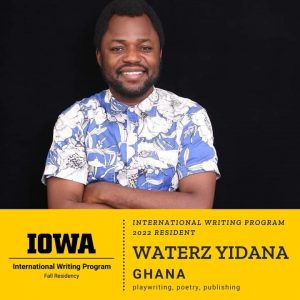 OPINION: Danger of electing someone with a regional mindset – Reno Omokri says

Reno Omokri blames men for challenges in the world

Nigerian women are most unfaithful in the world – Survey