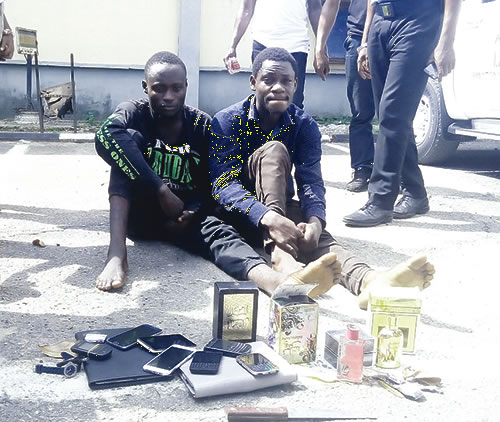 The rate of crime is really getting higher in Nigeria, as two jobless graduates, Desmond Quadri and Richard Orji, have been arrested by the Lagos State Police Command for allegedly raping a woman in the Ajah area.

It was gathered that the ugly incident happened when the two boys attended a party together, had some bottles of alcoholic drink. Then after the party, 24-year-old Quadri was said to have gone into the bush to defecate and was accompanied by his friend, Orji, 25.

The men, who had reportedly been friends for eight years, were said to have spotted the victim in her room alone and sneaked into the compound.

Orji was alleged to have stabbed the 32-year-old in the shoulder and thigh, before taking her phones, Ipad, perfumes and other personal effects.

Not done, the suspects allegedly took turns to rape her for about half an hour before leaving her for dead.

Residents were said to have taken her to the hospital and reported the matter at the Ajah Police Division.

Our correspondent gathered that the case was transferred to the Anti-Robbery Squad, State Department of Criminal Investigation, which began trailing the suspects.

The suspected rapists were said to have been caught after selling the victim’s phones.

A source said, “After they committed the crime, they fled and thought that was the end of the case. They sold one of the woman’s phone to someone. We were able to track the phone and get that person arrested. The buyer led us to them. They did not deny the crime.”

Quadri, an indigene of Abia State, said they were drunk on the night of the incident, adding that he had no criminal record and had never abused a woman in his life.

He said, “It was around 10pm on Sunday night at Ajah that the incident happened. We went for a festival and became drunk. We later felt we should go to a hotel to have another drink.

“On the way, I went to a nearby bush to defecate. After I was done, we saw that the house opposite the bush had no gate or any form of security. We decided to enter the building. We observed that there was a lady in her room alone.

“We saw that her kitchen did not have any burglar-proof bar, so we entered through the kitchen. I was outside watching to know if anybody would come, while Orji was inside.”

He said his mate, Orji, stabbed the victim with a knife and she screamed, adding that he immediately went inside to join him.

Orji said they took her phones, tablets, and other effects and took turns to rape her.

“We were drunk. I cannot say if it was the drink or something else. But I can tell you that we allowed the devil to take complete control of us,” he said.

The Commissioner of Police, Lagos State, Fatai Owoseni, said the victim was in the hospital, adding that she was responding to treatment.

“The woman was taken to the hospital after the incident and she is responding to treatments. The suspects will be taken to court latest tomorrow,” he told Punch.