In a video he shared on Snapchat, the rapper is seen receiving treatment at the intensive care unit (ICU) of an undisclosed hospital.

Sharing the video, he revealed that he saw his life flash before his eyes and thanked God for reviving him.

He said he has never felt so helpless in his life that, at one point, he thought he was dead.

“Alhamdulilah. I bless God for reviving me. I’ve never felt helpless in my life. Can’t thank you enough ‘Oluwa’. I thought ‘ awo loo’ like that this morning ni,” he wrote. 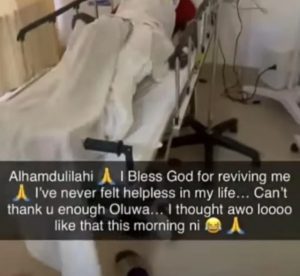