Mavin singer, Ruger has responded to those criticising him following a ‘better singer’ fight currently going on between him and his colleague, BNXN.

The drama started after Ruger’s comment of him being better than BNXN after a fan of Buju called him a low budget Samuel L Jackson.

The singer took to his Instastory to share an unbothered post of himself and a female fan taking it to another level during his sold out show in Paris, France. 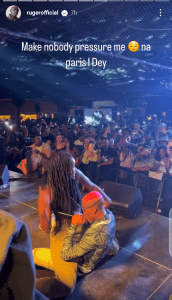