Ada Ameh’s partner, George Deegha, has penned a touching tribute to his ‘soul mate’, while mourning her sudden demise.
The businessman took to his Instagram, where he shared a photo of the late seasoned actress and expressed his deep pains. 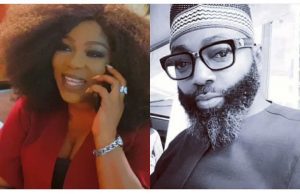 He wrote: “How my world crumbled before me, I have lost you, you were my friend, partner, soul mate.  I feel lost and alone, I do not know what to do. it is a never ending nightmare of pain for me, like a nail being drilled into my heart, aches and pull out . I know I will never get over your death , somehow I have to get through it. this grief is indescribable.”
It would be recalled that Ameh slumped and died on Sunday July 17 barely two years after the death of her only child Aladi Godsgift.
The remains of the actress who is best known for her Emuakpo Johnson’s role in award winning family Drama series, The Johnsons has since been deposited in the morgue.