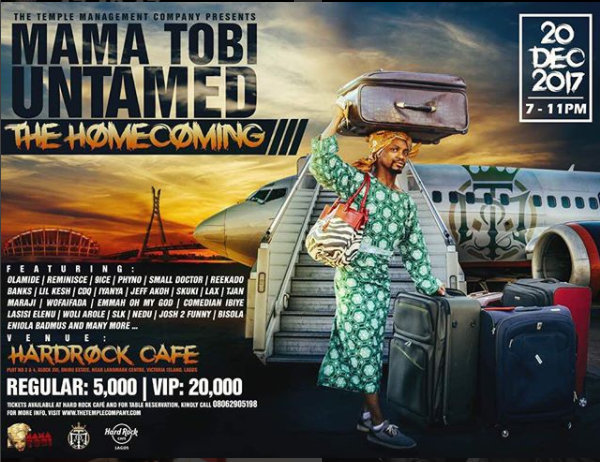 Packaged by the Temple Management Company, the event promises to be a night of drama and entertainment enriched by live stage comedy skits that has established Mama Tobi as one of the toasts of Nigeria’s growing internet comedy craze. Mama Tobi Untamed: The Homecoming Holds on December 20 at Hardrock Café, Oniru, Lagos from 7pm.

“They have seen me do video skits but this is going to be a different ball game where I will do my skits live on stage,” Mama Tobi said excitedly.

Joining Mama Tobi to entertain on the night are musicians including Olamide, Phyno, Reekado Banks, Small Doctor, 9ice, Bisola, Jeff Akoh, L.A.X, CDQ and Iyanya among others. Also to spice up the occasion with rib-cracking jokes and comedy skits are Maraji, Lasisisi Elenu, Josh 2 Funny, Woli Arole, Kenny Blaq, Wofaidada and Emma Oh My God among others.

Speaking about the show, the host explained further, “We have done it outside of Nigeria and there is no better time to bring it to the homeland than now. This Homecoming is a direct response to my fans who have been asking when I plan to bring this unique experience to Nigeria. With my team, The Temple Management Company (TMC), I can only tell Nigerians to watch out for something unique on December 20 at the Hard Rock Café Lagos.”

Also lending his voice, Mark Redguard, Head of Entertainment, TMC, assured that the Mama Tobi Untamed show will tackle serious social issues in some of the most creative and humorous ways typical of the comedian. “As with everything we do, we are giving all our support to our talent, just as we also plan to make this show a reference point.”

Oluwatobi Adeshina Onibatedo or Oluwa Kaponeski is by far one of the funniest and young African comedians plying his trade in America today. The son of Nigerian parents, the young comedian has deployed social media effectively to build an entertainment brand.

He has a degree in Management and Finance at Park University and is currently studying for a Masters in Business and Technology at Stevenson University.

As an active duty member of the United States Marine Corps, he is an embodiment of both the American and Nigerian dream and is a testament to the saying that with hard work, perseverance and a strong belief in God, all things are possible.