Peter Obi, presidential candidate of the Labour Party for 2023
Peter Gregory Obi  (born 19 July 1961) is a Nigerian businessman and politician who served as the Governor of Anambra State two separate times from 2006 to 2014.
Born in  Onitsha  i961, Obi graduated from the  UNIVERSITY OF NIGERIA  in 1984. Afterward, he entered business and banking, eventually rising to hold several high-ranking executive positions at banks. By the early 2000s, Obi was the chairman of the FIDELITY BANK  before leaving the position to enter politics.

Peter Obi fondly called ” okwute “( Rock) is a Nigerian Politician and businessman who was impeached while as governor of Anambra state in 2006 but the impeachment was overturned in 2007.

Peter Obi Early Life
Peter Obi is fondly called okwute and hails from AGULU, ANOCHA local government area in Anambra state. There is no publicly available information about his parents but it was said that he was born into a large Igbo catholic family. Peter Obi is the second born of the family, he has two brothers and two sisters
They are:
* Bibiana Adani ( elder sister)
* Fabian Obi CHINWUBA
* Joseph Ndide Obi
* Martina Obi

His elder sister Bibiana Adani is late. She reportedly died from an undisclosed ailment and was buried at her husband’s place in 2018 in the village, of Ukana in Enugu state.

*FABIAN Obi’s younger brother According to some sources is an ordained Reverend Father. In October 2020, he was appointed as the acting rector of the BLESSED IWENE TANSI major seminary in Onitsha.

Ndibe Obi his other younger brother is reportedly managing one of Peter’s companies.

Details of the youngest sibling and sister alive, Martina Obi, are not publicly available. 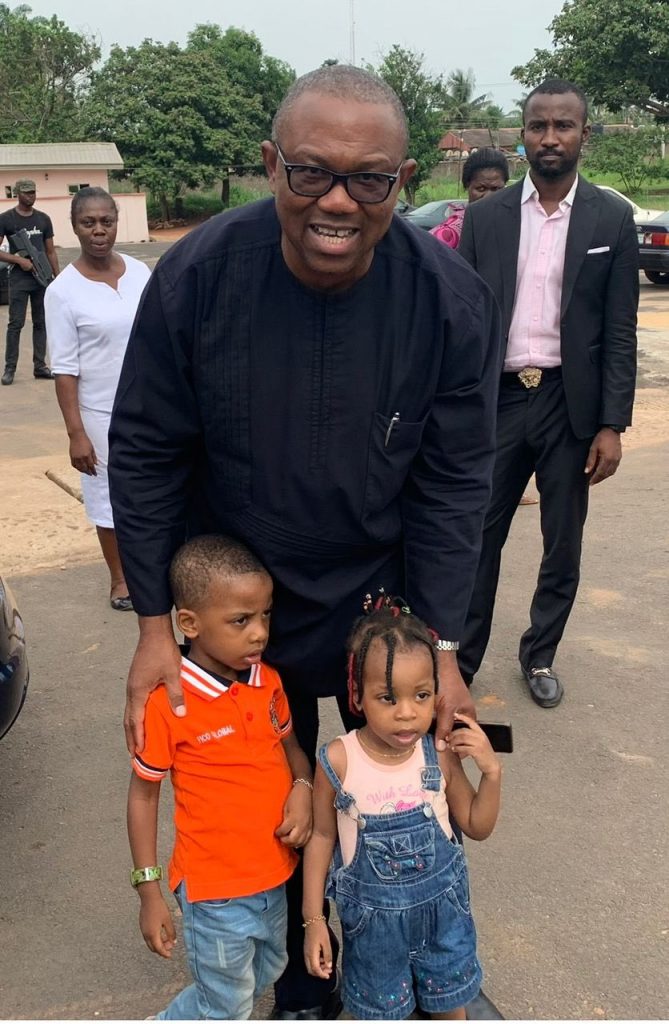 Peter Obi Education
Peter Obi attended Christ the king college, Onitsha where he obtained his west Africa secondary school certificate (WASSCE). He later gained admission into the University of Nigeria, Nsukka in 1980 and bagged a Bachelor of Art (BA) in philosophy in 1984. Peter Obi attended Lagos business school Nigeria, where he did his chief executive program.
He also attended Harvard business school, Boston, USA, where he did two programs (Mid To Mid Marketing).

As noted earlier, Peter Obi is a businessman, he started his life as a trader, a path which is not surprising since he was born into the corporate world and has served in numerous positions for different companies.

Some of Peter’s pre-political positions

Peter Obi Personal Life
Marital life and status
Peter Obi got married to Margaret Brownson in 1992. Their marriage is blessed with two children (a boy and a girl).
Meanwhile, Peter Obi has tried to keep his private life off the public eye.

Peter Obi’s children
The names are Gregory Peter Oseloka Obi (Male younger) and Gabriella Nwammaka Frances Obi (female elder). His daughter, Nwammaka is married to a Chicago-raised businessman, Chukwuma Okeke-Ojindu. The wedding was held in April 2022. She is a secondary school teacher.
Peter Son, Gregory is a philosophy graduate from Bristol university, England.

*He was the first gubernatorial candidate in Nigeria to legally challenge to its logical conclusion, his governorship electoral victory that was denied him.
He won in court and reclaimed its mandate.
*He was the first Governor in Nigeria to challenge wrongful impeachment and was re-installed by the court.
* He was the first Governor whilst still in office, to be approved a special adviser to the president.
* Though the only non-PDP Governor in the southeast ( made up of 5 states), he was elected by the other 4 PDP Governors as their chairman for 8years rather than the usual year.

Some fundamental achievements as the Governor of Anambra state.

* Anambra was the first state to commerce sub sovereign wealth. Savings are the first of their kind in sub-Sahara Africa. He left the equivalent of $500million in investment as well as local and foreign currency, including $156 million in dollar-denominated bonds.
* Through the partnership with the church in the health sector, his government-funded in the transformation:
* Iyienu hospital, Ogidi
* Our lady of Lourdes hospital, Ihiala.
* St. Charles Boroomeo hospital, Onitsha.
* Holy Rosary hospital, waterside, Onitsha.
* St. Joseph hospital, Adazi Nnukwu.

Nigerian Politician Peter Obi has a net worth of $10 Million

You can connect with Peter Obi on the following social media platforms;