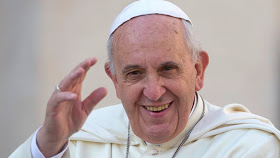 Pope Francis on Tuesday radically revised the process by which Catholics may annul their marriages, streamlining steps that many in the church considered too cumbersome and costly.
The move is the latest in a series of reforms by Francis as he seeks to make the church more responsive to the real needs of lay Catholics, especially those who have long felt marginalized by the hierarchy. Without the annulments, Catholics who remarry are not allowed to receive Holy Communion, which many describe as a painful exclusion from the church’s chief sacrament.”This move is in accord with the Pope’s oft-repeated image of the Church as a ‘field hospital’ that goes out to meet people where they are most in need, and then to treat their most serious wounds first — rather than stay at home and wait for people to come to them,” said the Rev. James Bretzke, an expert on papal affairs at Boston College. The three main changes announced on Tuesday are are:


• Eliminating a second review by a cleric before a marriage can be nullified.

• Giving bishops the ability to fast-track and grant the annulments themselves in certain circumstances — for example, when spousal abuse or an extramarital affair has occurred.

• The process should be free, except for a nominal fee for administrative costs, and should be completed within 45 days.

The Pope’s reforms came Tuesday in the form of two “motu proprio” documents, Latin for “by (the Pope’s) own initiative.” They become part of Catholic canon law on December 8, the beginning of Francis’ declared “Year of Mercy.”