Nollywood actress, Nkechi Blessing Sunday, has responded to backlash after she shared sex toys as souvenirs at her mother’s remembrance party.

Backlash had followed the viral video on her announcing and thereafter distributing the gift to the female guests at the event.

Via her Instastory on Monday, the actress urged her critics to leave her alone.

The actress stated that some of those criticising her on social media do not take care of their parents as opposed to her, who made sure she cared for her mother before she died, saying in Pidgin English, “Even people wey don forget their parents wey never die sef dey talk. Everyone around me knows I don’t joke with my family.” 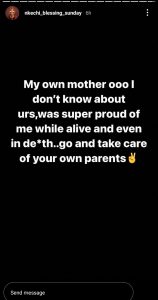 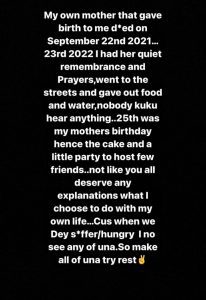