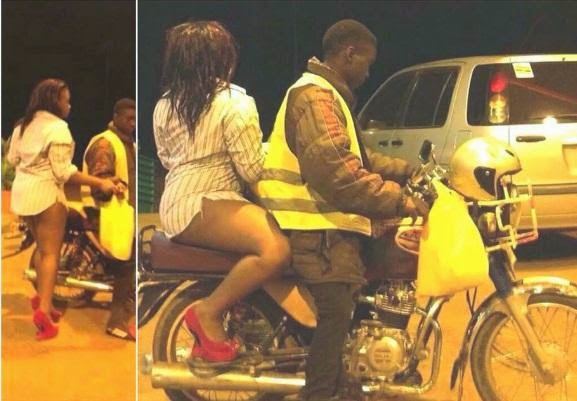 Today I have a true story, to share with my readers for
them to read, laugh, learn and ease the tension the economy situation has
stirred in all average Nigerians..
Are you aware that a typical Lagos guy wouldn’t waste
much time to have a hard-on and start poking the butt of the lady sitting in
front of him on Okada especially when it is dark?
Dear Constant readers, it’s not a laughing matter oh! See
me see Lagos wahala!
Please permit me to ask this question. Is it possible for
male and female passengers on a commercial bike to have sex while the bike is
on motion? You may probably agree that it’s not possible, but I tell you, there
are men who stupidly think it’s possible.
Now my story. Few days ago, after a rainy hectic day at
work, I left my office quite late. By the time I got to the bus stop, I found
the whole place crowded.
I knew I couldn’t join the rowdy population of passengers
in the mad struggle to get on the buses on the flooded roads. So, I decided to
beat the dreadful traffic by hopping on a bike.
The okada fare to my destination turned out to be very
expensive, especially as rain had fallen. Unfortunately I had already spent too
much money during the week, so I had little on me and therefore had to manage.
I approached the first Okada man I saw. As we were bargaining
the price, a handsome guy in a clean suit and shining black shoes suddenly
appeared by my side.
He was a sight for sore eyes. He was good looking and he
knew it by the way he smiled. He had the right height and a pair of well-spaced
shoulders, shoulders that seemed to be begging a lady to “come on baby, lean on
me.” Whoever sewed his suit and trouser could admirably put Calvin Klein or any
other haute couture designer to shame. I noticed all these but honestly, I
wasn’t impressed. It takes more than a handsome face to get me wet. I gave him
a clinical observation. He asked the okada man if he would carry two
passengers.  I knew with two passengers,
the money would be halved. And it was exactly as I thought. Initially, the
okada rider had asked me to pay N500, but with the arrival of the handsome
dude, the fare was split down 50-50. I sat behind the Okada man, while Mr.
Handsome sat behind me – imagine me sandwiched between two men.
We had not gone far when I felt the unmistakably prod of
his turgid manhood against my fabulous buttocks! Jeez! Some men are insane! How
on earth can a guy get an erection when he doesn’t even know me?
I tried to pretend I didn’t know what he was doing but I
wasn’t damn comfortable. He kept, “poking” me, so to say! Every time the bike
man climbed over a bump or plunge into a pot hole, it would be an opportunity
for him to ‘poke’ me. The turgid pole between his legs was doing seesaw against
my fleshy backside. I finally lost my cool when he had the effrontery to slide
his hands besides my hands attempting to touch my bo0bs. My patience snapped
and I turned to stare into his eyes. It was getting dark, I couldn’t see his
face but I think he saw my eyes glaring. I gathered courage to ask him in a
no-nonsense voice: “Mr. Man what is your problem?”
And the idiot replied in a rather shaky voice, “I-I just
want to – to touch your hands.” See me, see trouble o!  Do I look like his wife or girlfriend? Which
one be hold my hand?
I fired him with all the venom in my mouth and he had no
choice than to alight before his bus stop. If he had insisted on riding with me
to his destination, I would have made sure I put him to shame with the most
caustic verbal assaults I could muster.
When he got down, he looked at me and apologized.
Since then I made up my mind that no more sharing of
okada seat with any male. If I must board a commercial motorcycle (because I am
still an average struggling lady) then I must sit behind the guy and not the
other way round. What was he thinking anyway? To screw me on a motorbike, with
the rider speeding along the highway? Lagos men na waa oh!
The next day, I narrated my ordeal to my next door
neighbour, and it happened that she also had similar experience. In her case,
she had to order the bike man to stop in the middle of an express road.  She climbed down from the bike and said she
was no longer going except the male passenger behind her got down. She insulted
the male passenger and even stoned him. She didn’t waste time in explaining to
onlookers who had gathered that the man had a ‘mischievous snake head’ buried
in his trouser.
Guys, if you don’t want strange men to paw and poke your
“babe” with their yeye and stupid manhood, better buy her a car. If for the
time being you can’t afford that, then give her enough money to pay a fare that
would cover for two passengers if she has to take a bike. As for me, I can’t
afford a car now. The life of a lady is not an easy one. But all these randy
men ought to behave themselves. If you are one of those who go about poking
young ladies on Okada with your bulging crotches you better control your
bad-mannered JT.
Getting hard-on and poking a total female stranger na bad
manner oooooo!