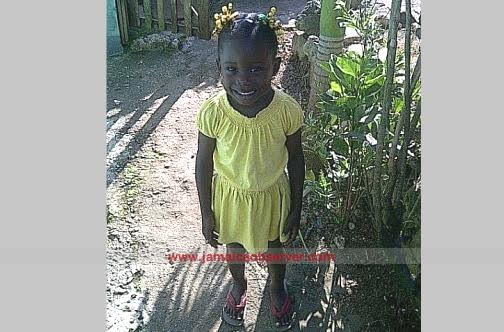 Body of three-year-old Nevalesia Campbell was discovered in bushes with chop wounds about 9:30 on July 10 at Orange Hill in Brown’s Town, St Ann, Jamaica.
Acting commander of the St Ann police Superintendent Gary Francis said the mother of the child reported her missing at about 2:00 am.

“She informed the police that about 10:30 pm last night she put Nevalesia and her twin brother to bed. At about 11:00 pm she woke up and gave the child water. She was watching television with her when she fell asleep. At about 1:30 am she woke up and recognised that Nevalesia was missing,” Superintendent Francis told the Jamaica Observer. “Her body was later found with chop wounds in a precipice,” he added.Unconfirmed reports are that she was sexually abused by her attacker. The mother, Mahalia Poyser, had to be taken to the hospital since the incident. Angry residents said whoever committed the gruesome act should be punished.

“There is nothing that a little pickney can do to deserve this, even if the parents dem do somebody something. Good God man!” one man exclaimed.
“God going bring dem to justice!” a woman added. But the superintendent appealed to them to cooperate with the police by telling them what they know.
“Do not take justice into your own hands,” he urged. “The police are “looking into a number of theories, and are appealing to residents to tell the police what they know. We want to appeal to parents, to mothers, to do more to protect their children.”There are reports that residents heard a child crying in the night, but did not think it was a result of the child being harmed. Several of them are dispelling the mother’s report that the child was taken while she slept. They are alleging that she was at a function in the community when the child was taken and that it was perpetrated by a fellow resident.

“This is a very sad day in the community; the community must come together and tell the police what they know,” Councillor for the Brown’s Town Division Delroy Redway said. Meanwhile, Opposition Leader Portia Simpson Miller deplored the killing and has commiserated with the residents, saying that, “Jamaicans must be particularly incensed that children continue to be among the victims of vile and senseless murders.”
“I grieve with the parents, family members and the entire community at this senseless killing of one so young. I convey my sincere condolence to her parents at this time of great pain and loss,” Simpson Miller said in a statement yesterday.”The mother and stepfather of the murdered girl are expected to be charged under the Childcare Protection Act. The police have confirmed that the two were taken into custody after it was revealed that Nevalesia Campbell and her twin brother were alone at home when she was taken.