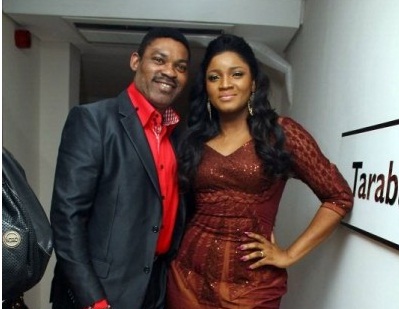 This is currently an ongoing drama between some fans and followers
on Omotola Jalade’s Instagram page.
The whole drama ensued two days ago when the actress popularly
known as Omosexy, shared a black and white photo of her husband, as her ‘Man
Crush’.
Shortly after the posted the picture on Instagram, her
comment section was filled with compliments. But one angry fans who goes by the
name @asoebistyles didn’t mince words as he called out Captain Mattew Ekiende, accusing
him of all sorts of atrocities, even sleeping with his wife.
‘Hope he has stopped bleaching. He is old already, is
that why Omotola used use black and white photo’, his first comment reads.
After so many verbal attacks from Omotola’s faithful
followers, @asoebistyles struck again with more harsh words.
‘Just like some ate from his wife’s awoof big yummy ass,
while he was banging mine,
People are so funny, I give it to her sha, and not every
woman can put up with a cheating + bleaching hubby. He is old and possibly
still HIV negative, she should continue crushing on him.’
As the abusive comments lingered, the Nollywood icon had
to step in to defend her husband and the father of her four children.
‘Your Page has no identity. Identify yourself with proof
of your accusations or go find other victims. You’re not a psychopath just
looking for attention are you? This is bad behaviour get help, she warned the abuser.
hmmm..na waaah oooo