Queen Elizabeth II has died at 96 years old, the Buckingham Palace has confirmed. Today September 8, 2022, Buckingham Palace released a statement to the press noting that the Queen’s doctors were “concerned for her health.” She remained under medical supervision until her passing at Balmoral Castle, where she spent the last days of her life.

Reacting to passing of the Queen, EPL football club, Tothenam hotspurs took to the official page in a tribute post, wrote: 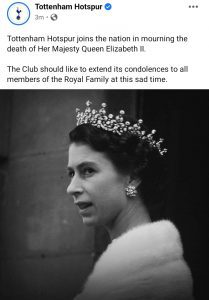 She is survived by her four children – Prince Charles, the Prince of Wales, Princess Anne, Princess Royal, Prince Andrew, the Duke of York, and Prince Edward, the Earl of Wessex—as well as eight grandchildren and 12 great-grandchildren.
A service for the queen will take place on date to be announced.