Korra Obidi who took to her Instagram page to call out all those envying her that contributed in the failure of her last marriage.

Recall that Korra Obidi’s husband, Dr Justin Dean had called it quit in April after he took to his Instagram page to reveal that he will be ending his marriage with her after constant unfaithfulness.

Taking to her Instagram just recently, she stated that a lot of people were jealous of her marriage that’s why they kept sending emails to her husband keeping tabs on her.

She then reaffirmed that, if she has a second partner, she will never reveal him to the public in order to prevent them from ruining their relationship the same way they did her previous marriage.

Latasha reacting to her video, stated that Korra hasn’t learned her lesson and expressed her displeasure at this.

The mother of two was admonished by her to keep quiet, enjoy her own company, and quit supplying the onliners.

She should take care of herself and strive for a beautiful life, Latasha urged.

Even though Latasha attested to Korra’s strength and talent, she believes that her weakest area is social media. 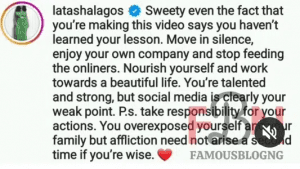