Singer, RudeBoy has dropped an information to ladies, as he states that men don’t really care if you love them.

According to him, all men care about is peace of mind and money they don’t really care if their spouse loves them.

Taking to his Insta-stories he wrote;

“A man just wants to make money and have peace…..he doesn’t care if you love him or not. Before going to bed, he thinks, calculate etc. strategize on how to achieve at the end of the day. NO TIME” 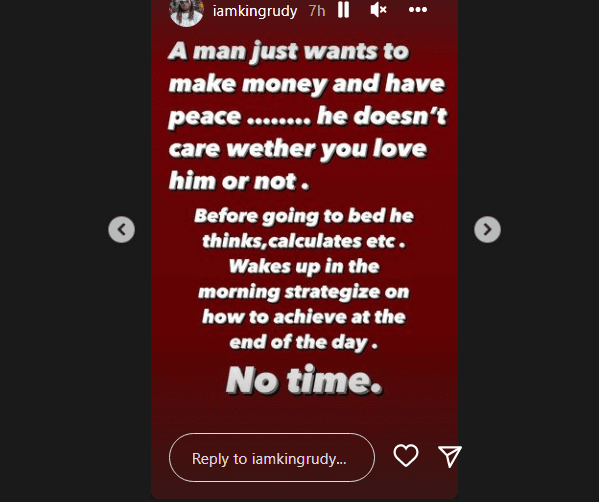 Recall that the artist is having a rocky marriage as his wife, Anita Okoye has filed for a divorce stating that the singer was cheating on her with one of their maids who was identified as Florence.

In the court petition, it was stated that Paul sent his wife packing out of his house to ‘clip her wings”, which suggests that the couple are not living together, as it was not also stated if Anita returned home.

Anita is a business entrepreneur based in Atlanta, Georgia, USA, where she lives with her kids.

In September 2021, amid his divorce controversy, the singer visited his wife and children in the U.S.

The petition also stated that Paul sent his wife packing, and she had no one else to lean on.

It reads, “That I know as a fact that while sending I and petitioner’s sister packing, the Respondent also boasted that the reason for his actions was to ensure that the Petitioner’s wings were clipped and that she had no one else to lean on.